Buza beach (Buža Beach) is located on a rocky shore from the outside of the City Wall of Dubrovnik and is famous for its unusual secluded location and spectacular views of the harbor. You can also find a popular Buža cafe here.

It's not that easy to find this secret beach. There won't be any signs or pointers on your way. To get there you need to walk around the Dubrovnik Cathedral from the left side and reach the City Wall. There is a small inconspicuous door in the wall (the door of St. Stephen) which leads to Buza beach and Buza cafe. 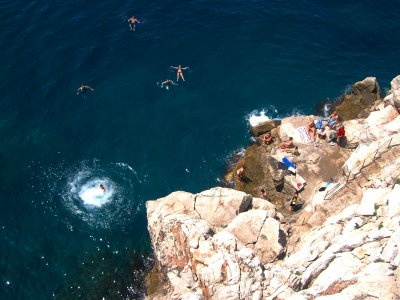 On the rocky Buza beach you can enjoy an entertainment for brave hearts - jumping from the high cliffs into the Adriatic Sea.

Buža Beach on the map